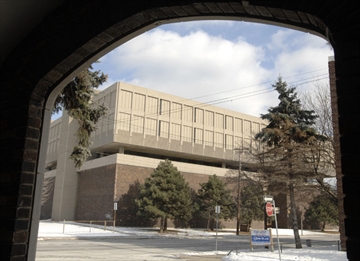 The public school board must delay opening a new $32-million high school for a year to score a land swap with the city — a move that pushes the project beyond the provincial funding deadline.

The proposed swap, approved by councillors Thursday, involves the recently expropriated former Scott Park school and portions of the adjoining city-owned park and arena, which is being demolished.

The end result would be a new three-storey school facing Cannon Street near the Pan Am stadium, while a new city seniors and recreation centre would face King Street East and join to a revamped Jimmy Thompson Pool.

The catch: the board would put off construction until after the 2015 Pan Am Games, making the current provincial deadline of a Sept. 2016 opening impossible to achieve.

Chair Jessica Brennan said she supports the compromise and added she believes there’s “wiggle room” to put off opening until 2017 because of the unique challenges encountered by the board in its efforts to find a school site.

That long-running saga includes council rejecting a partnership on a joint facility a year ago — then pursuing a heritage designation for the board’s “plan B” site, King George school. The board still needs to discuss the latest proposal later this month, but facilities officer Daniel Del Bianco said he’s been in touch with provincial officials who are “aware of the situation,” including the sensitivity of construction during the Pan Am Games.

“They see the greater good (in a delay),” he said, expressing confidence the deadline-driven cash would not be pulled.

Councillors, meanwhile, were generally supportive of a city staff-negotiated plan that includes working together on demolition of existing buildings and design of new facilities, if not construction.

That’s a significant U-turn given the reluctance of councillors last year, who panned a formal partnership, citing thorny relations with the board on other shared facilities.

Temporary Ward 3 Councillor Bob Morrow acknowledged those “obstacles and lingering difficulties,” but praised city and board staff for reaching a “creative” solution that gives both parties what they want.

That includes a larger, 1.65-acre property for the school board and the preservation of King George school from demolition sought by residents and heritage advocates. Parking for the new school would be moved to a demolished Parkview school site.

The city’s neighbourhood development director Paul Johnson acknowledged not everyone will like the plan, which requires building over popular baseball fields at Scott Park. The goal is to relocate the fields, he said, but acknowledged users want to stay put.

Mayor Bob Bratina was the lone council opponent of the plan, earlier voicing concern about the legal implications of the land swap, which includes using part of the recently expropriated former Scott Park school.

The board reacquired that property — which it originally off-loaded for $650,000 a decade ago — in an expropriation battle with a developer, but a final price has not been set. That developer, Jamil Kara, recently filed a $21.5-million claim with the Ontario Municipal Board and argues the land swap proves the school board didn’t need the property for the use cited to justify expropriation. His lawyer suggested in a letter council will be entangled in the legal battle, but city solicitor Janice Atwood-Petkovski told councillors otherwise in a closed-door session Thursday.