Neighbours worry about music and violence near Club Seventy-Seven downtown 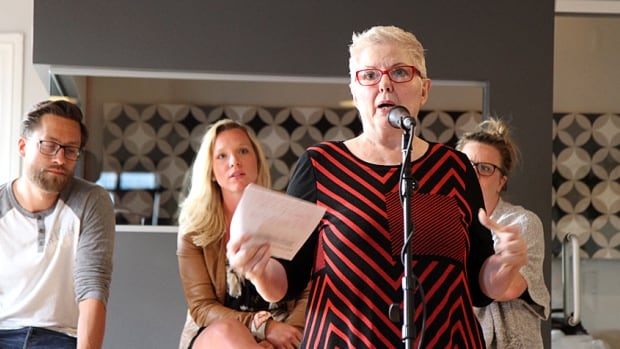 “It was a constant thumping and banging, kind of a din of noise,” says Carol Priamo of living next to the music coming from Club Seventy-Seven. “It really did affect you viscerally, physically. In my stomach, I felt nauseous.” (Samantha Craggs/CBC)

Carol Priamo lives across from Club Seventy-Seven, and she can describe the music that thumps from the club in vivid detail.

‘It was a constant thumping and banging, kind of a din of noise.’– Carol Priamo

It’s the sort of loud that triggers other senses. It’s formless and unintelligible, and it throbs for hours like a migraine. Priamo has slept in the bathroom just to get away from it. Some nights, even that’s not enough. She moves out to stay with her mom.

Priamo says when she and partner Chris Motherwell moved into Film Work Lofts six years ago, the developer told them the club would be gone in a year. But she had no idea it would be this bad.

“It was a constant thumping and banging, kind of a din of noise,” said Priamo whose car has been vandalized three times. “It really did affect you viscerally, physically. In my stomach, I felt nauseous.”

Priamo was among the roughly 60 people who gathered at a community meeting Tuesday night to discuss Club Seventy-Seven and a city plan to turn the area into a park. The work is scheduled for 2021, but residents at 80 King William St. don’t want to wait. 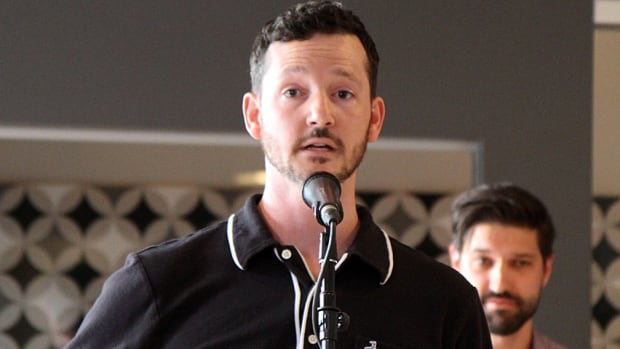 “We want that park,” says Dale Mugford, president of the Film Work Lofts board. The board has gathered about 400 names on a petition. (Samantha Craggs/CBC)

They say they’ve had issues with the club for years. They worry about the violence they see around it. On May 13, Vince Lofaro, a door man at the club was shot and killed.

‘Vince was the best father anyone could ask for, and he was my best friend.’– Jackie Attard

Word spread through the lofts that there were seven stray bullets involved in that shooting, said Roz Mugford, whose husband Dale is president of the Film Work Lofts board. Ever since, she’s felt a chill. What if her son had been outside?

Under the John/Rebecca plan, the city will build a new park between Rebecca and King William streets, and John and Catharine. Right now, there are surface parking lots, a shawarma place and the club.

Property acquisition talks have already started, said Jason Farr, Ward 2 councillor. The city was due to start work in 2013, but did the Gore Park plan first. John/Rebecca is scheduled for 2021-22.

The Film Work board has gathered about 400 names on a petition urging faster progress. The Beasley Neighbourhood Association wants the city to expropriate if necessary. 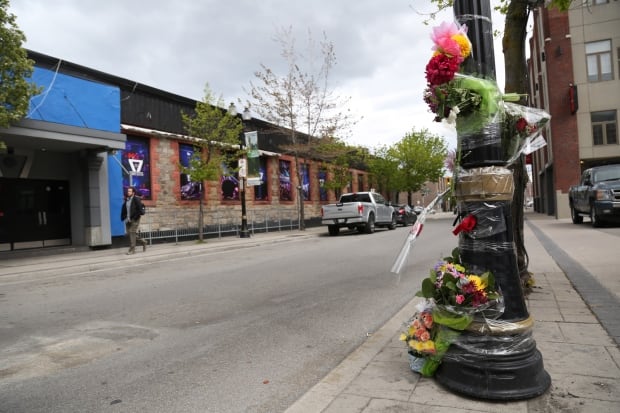 A small memorial has been built on King William Street in front of Club Seventy-Seven, the site of a fatal shooting that took place on the morning of May 13. (Chris Seto/CBC)

Jackie Attard, mother of Lofaro’s eight-year-old son Nathaniel, spoke on Tuesday. She wondered how someone could shoot Lofaro less than two blocks from Hamilton Police’s headquarters.

“Vince was the best father anyone could ask for, and he was my best friend,” she said.

The club owner isn’t talking. He wouldn’t talk to CBC Hamilton last week except to say that “if they want me to move, I’ll move, but they have to pay me for it.” The club’s manager was at the meeting Tuesday, but remained anonymous in the crowd. 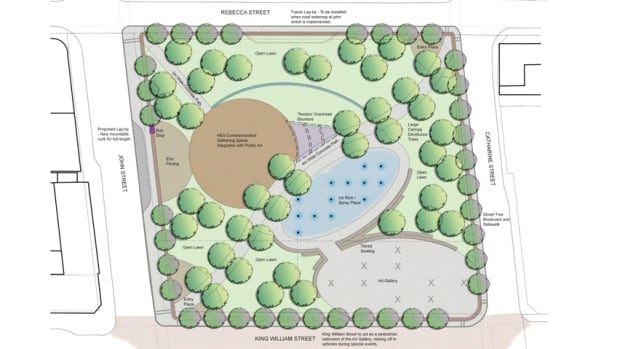 This is the concept plan for the John/Rebecca Park. Work is scheduled to start in 2021, but nearby residents want it to happen sooner. (City of Hamilton)

‘This is an extraordinary circumstance.’– Coun. Jason Farr

Farr plans to bring the issue to a future city council committee meeting. Work is ongoing at Gore and McLaren Parks, and planned for Beasley Park.

“This is an extraordinary circumstance,” he said.

Priamo, meanwhile, has moved to a unit at the back of the building. The music is still loud, she said, but “it’s bearable.”