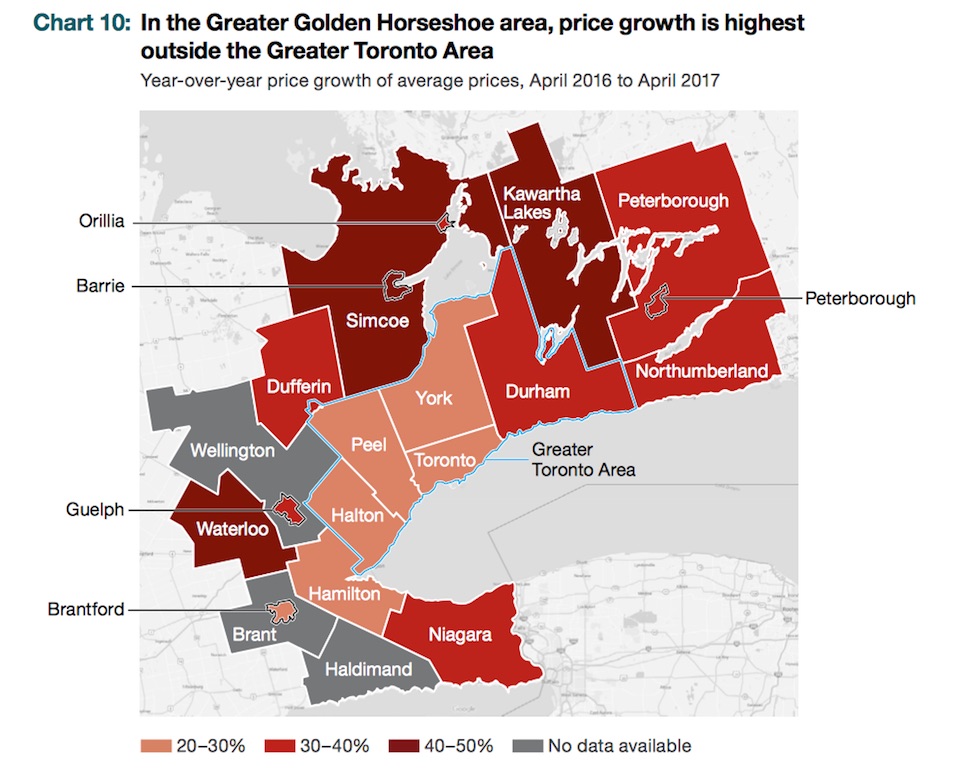 When the Ontario government announced a foreign-buyer tax last month, it applied it not only to the Greater Toronto Area but the entire Greater Golden Horseshoe.

If it seemed too broad a stroke, the Bank of Canada’s latest Financial System Review gives a good look at why policymakers may have been compelled to go big with the levy.

In its June review, published this week, the central bank mapped annual price gains as of April for the whole region, minus a few areas for which data wasn’t available.

Except “large” could be an understatement for some local markets — especially those outside of Toronto proper.

For example, home prices were up between 40 and 50 per cent on a year-over-year basis in Waterloo, Simcoe, including Barrie, and the Kawartha Lakes.

Gargantuan annual gains of 30 to 40 per cent were recorded in Niagara, Guelph, Dufferin, Durham, Northumberland, Peterborough and Orillia.

In the range of 20 to 30 per cent, you’ll find Brantford, Hamilton, Halton, Peel, York and yes, Toronto.

Some — but not all — of the appreciation the Bank of Canada observes can be chalked up to employment, immigration, a housing-supply crunch and demand from non-resident homebuyers.

“Solid growth in demand fundamentals in an environment of relatively inelastic housing supply can generate strong price gains,” the Bank of Canada writes.

“These fundamentals cannot readily explain the pace of the price increases seen in the GTA over the past 18 months,” the central bank adds.

That could explain the gap between fundamentals and the current rate of appreciation in the GTA’s housing market, inflaming risks of a correction.

“When expectations reserve and prices recede, investors may quickly sell their assets, possibly leading to fire sales with adverse consequences for the rest of the market,” the central bank notes.