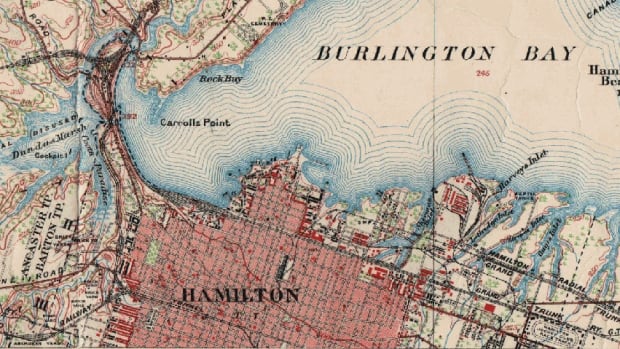 This 1909 map shows a dramatically different waterfront, as well as a number of inlets in north and south Hamilton. In fill has since created Hamilton’s industrial area and most of the North End, and most of its inlets are filled. (Lloyd Reeds Map Collection at McMaster University)

Louie Santaguida’s company is building a 30-storey condo tower in downtown Hamilton. And for a few months, he thought he had plans for its substructure nailed.

He’d already sold 70 per cent of the units, which include two-bedroom penthouses for $684,000. Then came an unexpected delay — an old stream under the future home of The Connolly.

“We’re sitting on a former river basin from 10,000 years ago,” Santaguida said in the fall. “We’re overcoming geotechnical challenges. We’ve been doing that for the last three months.”

Santaguida’s dilemma isn’t a unique one. Peel back Hamilton’s surface and you’d find decades of streams, rivers and watercourses that once existed. They’re now known as “ghost rivers.” 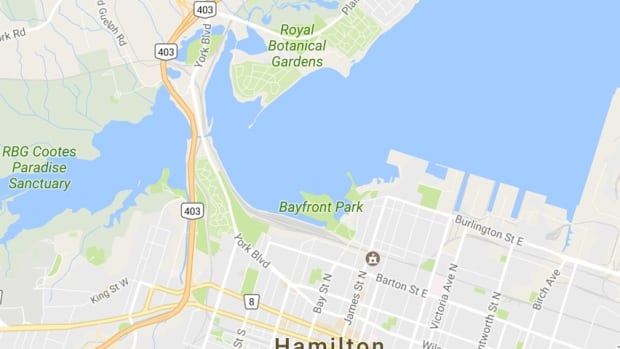 This modern day map shows a differently shaped Hamilton waterfront, and the loss of most of its lower city inlets. In fill has altered watercourses throughout the city. (Google Maps)

Centuries ago, Hamilton was a blanket of lush green space. Then along came humans who wanted more space to build.

Sometimes they rerouted water into culverts and built roads and parking lots on top. Sometimes they filled in the watercourses — with dirt, with garbage, with other material.

Generations later, developers still shoulder the impact. Like Santaguida, they dig in and find the soil soft and unstable.

“Water always wins in the end,” said Dan McKinnon, the city’s general manager of public works. “Unless you reroute it in a sustainable way, it will come back to haunt you.”

The North End is an example of modern day building on what used to be water. Look at a map from 100 years ago, McKinnon said, and that space is part of the harbour. Much of Hamilton’s industrial area is in fill too.

Hamilton isn’t alone in this, said Mike Waddington, a McMaster University professor of geography and earth sciences. San Francisco is a famous example of this dynamic. 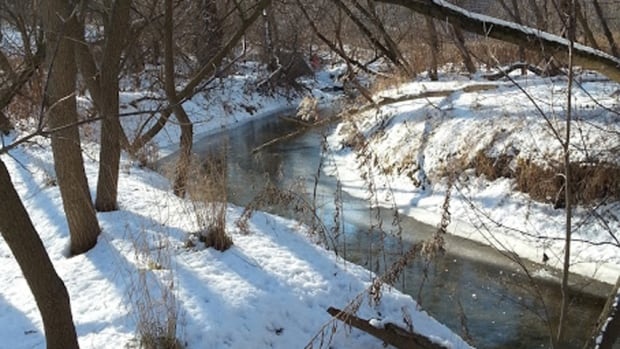 Ancaster Creek runs alongside Lot M at McMaster University. A group is trying to restore the parking lot to its natural wetland state, partly for the health of the creek. (Reyna Matties)

The Niagara Escarpment and its many waterfalls make Hamilton’s streams persistent, Waddington said.

“There are many streams that would have come down the escarpment and cut through the town,” he said. “Along the shoreline, we had huge wetlands with their own little inlets and small streams.”

Newer cities, such as Oakville, incorporate greenery into the urban landscape, Waddington said. But “in Hamilton, they were mostly filled in.”

“We now know that small streams and wetlands provide valuable ecosystems and services.”

There’s at least one local movement to peel back the concrete and let water flow freely again. A McMaster University group called Parking to Paradise is reviving wetland at parking lot M.

The area was once the Coldspring Valley Nature Sanctuary, said graduate student Reyna Matties. Royal Botanical Gardens owned it until 1963. McMaster bought it two years later and paved it.

The sanctuary bordered Ancaster Creek, Matties said. Rainwater still moves across the parking lot. But now it picks up contaminants such as salt and garbage and carries it into the creek.

Environment Canada says creeks need a 30-metre buffer. Parking to Paradise is restoring the channelized Ancaster Creek, and to create a buffer, restored parts of the parking lot to green space.

The group hopes to erect signs and hold walking tours in 2017, said Matties, whose graduate research focuses on the buffer. It will also put two large bioswales at the south end of Lot M.

Otherwise, many of the watercourses are lost to the human eye. They flow through subterranean Hamilton, popping up only when someone digs too deeply.

But ghost rivers capture the imagination. In The Paris Review, writer Will Hunt documented following a famous one — the once wild Minetta Creek through lower Manhattan. He traced its route, hoping for a glimpse of it as it ran under a nursing home and Barnes and Nobles.

At the bookstore, he went into the basement. He found no trace of it.

“Perhaps it was only my imagination,” he wrote, “that the air in the basement felt inordinately damp.”