Hamilton’s LRT project is behind schedule. Does it matter? 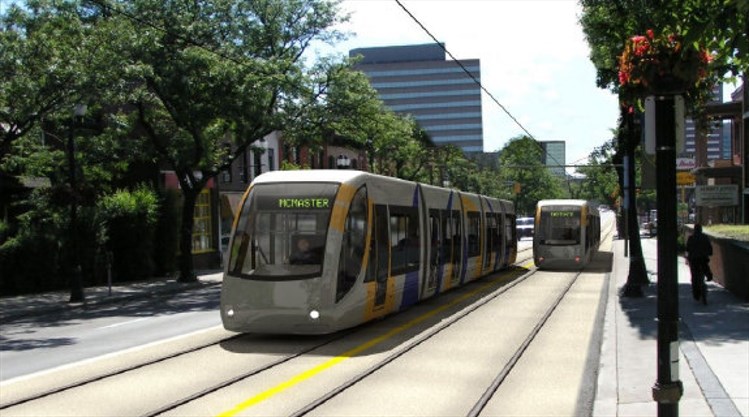 LRT trains moving along King Street East in this artist conception. Without a signed contract next year, the contentious project could become an election football. – City of Hamilton

Publicly run or not, Hamilton’s $1-billion LRT is behind schedule and a construction contract won’t be awarded before either of next year’s elections, say project officials.

Does that delay matter? It depends who you ask.

Councillors meet Friday to discuss the position of Metrolinx — a reluctant yes — on the city’s request to let the HSR run a provincially funded light rail transit line in Hamilton.

Metrolinx has given the city until Jan. 24 to make a final decision. It also warned pursuing a city-run LRT would mean a four- or five-month redo of an already completed request for qualifications process.

But no matter what the decision, it’s already too late to meet the original goal of signing a contract next summer and starting early construction work by the end of 2018, confirmed Metrolinx LRT spokesperson Jamie Robinson.

“It takes about a year from (RFP) release to financial close and we’re not going to get the RFP out in this calendar year,” he said. Both Robinson and city LRT point person Paul Johnson nonetheless said “major construction” remains a possibility sometime in 2019.

But without a signed contract next year, the contentious project could become an election football for both provincial and municipal candidates, said Coun. Lloyd Ferguson. The provincial vote is set for next June, while the next city election is in October.

“That scares the living daylights out of me,” said Ferguson, who voted against requesting public LRT operations in August in part because of his concerns about project delays. “It puts the project at risk.”

Coun. Terry Whitehead, on the other hand, argues the original schedule is now largely “irrelevant” because all three major provincial political parties have committed to the promised transit funding for Hamilton.

“We have those commitments … why do we need to rush through this?” said the Mountain councillor, who added he wants a “far more detailed” staff report on local LRT operational costs and potential savings before making a decision.

“What we do now carves out the structure of our transit system for generations to come.”

Supporters and opponents of LRT have parsed the supportive statements of party leaders in different ways.

“If the mayor and council have stated very clearly that’s where they want the provincial partnership to be, that’s where it will be,” he said, spurring celebration among LRT fans.

But detractors prefer to point to his followup statement: “If the mayor and council say they want that investment to be in another transportation project, then it’s incumbent on the province to be flexible on what is the clear municipal will.”

Interestingly, two local councillors who both oppose LRT are also running against each other in Flamborough-Glanbrook in the looming provincial election.

Flamborough Coun. Judi Partridge announced her candidacy for the Liberals earlier this year, and while she remains personally opposed to the LRT project she will respect the will of council.

Mountain Coun. Donna Skelly, who will run for the Progressive Conservatives, said Tuesday she still thinks LRT is the “wrong project” for Hamilton and added she is pleased Brown has promised to “keep that transit money in Hamilton.”

The union for city bus drivers, meanwhile, issued a statement Tuesday hailing the Metrolinx decision to allow consideration of a HSR-run LRT as a “huge step forward in the fight to keep transit public.”

But ATU Local 107 also slammed the province and its transit agency for using “fear-mongering and misinformation” as a “threat” to try to get the city to back down from its support for publicly-run LRT.