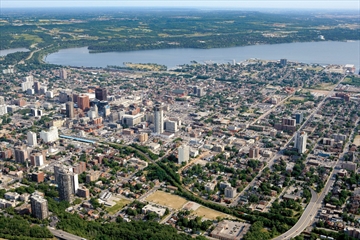 Hamilton has secured its title as the No. 1 city to invest in Ontario.

The Real Estate Investment Network of Canada (REIN) said Tuesday the city re
mains the top location across the province for investment for the second consecutive year. REIN is a Canadian business that provides resources and information to its 2,700-plus members regarding real estate investment.

The detailed investment report identifies cities, towns and regions poised to outperform other regions of the province over the next five years.

“But it’s not surprising. We’ve had a perfect year.”

Hamilton’s growth spans all industries and it’s difficult to pinpoint an area of success, says Everson.

An indicator is the record Hamilton is setting when it comes to building permit values. Hamilton posted $562 million by the end of the second quarter.

In Mississauga, permits totalled $385 million for the same period.

He points to the city’s industrial vacancy rates which have now dropped to 2.3 per cent, a 26 per cent drop from last quarter.

“Buildings are being filled and companies are leasing those vacant spaces.”

The report takes into account a series of criteria including population growth and income, economics, housing trends, vacancy rates and infrastructure.

“Hamilton’s reputation from the outside is a little sullied,” said REIN founding partner Don Campbell. “It’s not a steel town. While steel is still a player, high tech and young professionals are redefining the city.”

Campbell references the downtown core, which continues to attract businesses and residents.

Campbell says he’s blown away by the work of Hamilton’s economic development department and its efforts to attract jobs back into the city.

“They are on the forefront of Ontario for growth,” he says.

Campbell feels it’s imperative for those who come to Hamilton for their education to stay and work in the city.

“If you want to attract young professionals, you need to provide the infrastructure they want,” says Campbell.

“Part of that is a lively and safe downtown and a really good transit system. Light rapid transit needs to occur and it needs to happen quickly,” he suggests.