Everything’s a little lighter in a floating home 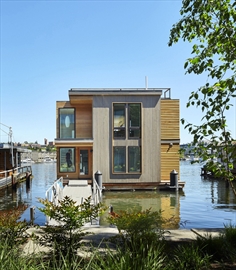 “There’s something very, very unique about the water,” says Seattle attorney James S. (Jimmy) Rogers, who moved into his glistening-new, sleekly contemporary floating home a year or so ago. “You get into the rhythm — the sound of the water, the lapping of the waves. It’s peaceful and relaxing when I work from home. So interesting. Never boring. It’s restorative.”

Beyond the Floating Homes Association (organized big A), there’s a floating-home community (casual little c) built on icons, only 520 or so in the Seattle area, estimates developer Peter Erickson, a fundamental member of both and founder of The Urban Fund. (Rogers’ home is Erickson’s 10th floating project; Erickson lives with his wife and two children in a floating home of their own, built in the early 1900s.)

“You feel over time, since we all live cheek-by-jowl, there’s definitely a sense of community,” Erickson says.

He and Rogers, who once owned a floating home two docks down from the “Sleepless in Seattle” movie set, have known each other for years, as a matter of fact — but Rogers had no idea he was buying a home by Erickson until he learned the real estate agent was Erickson’s son.

“Seattle is a very small world,” Erickson says. And the secluded Portage Bay community — is an especially special part of it. “It’s a lovely, serene part of the city,” Rogers says. “You feel akin. People wave when I have breakfast.”

Course, it’s a little different building a floating home, too: “The first thing you do is go through all of the tool bags and get rid of the levels,” Erickson says, laughing. “And we have to pay much more attention to water-envelope security and keep the structure heavier on the bottom.” And the home inspection took two inspectors, Rogers says: one a diver.

Otherwise, though, a beautiful home is a beautiful home — and Rogers defines beautiful as livable, practical and creative. An inverted design flips the living and sleeping spaces, so the three bedrooms (a master suite plus one bedroom for each of Rogers’ two grown daughters) are on the first floor, with the wide-open, light-filled great room upstairs.

“I love sleeping and being on the water,” Erickson says. “The views are just better one floor up, and you don’t sleep during the day, so you might as well enjoy them.”

“The lighting is amazing at all different times,” Rogers says. “At night in the winter — I’ve weathered storms here — you can see the seasons change out your window.

“People talk about water as the focus of everything,” Rogers says. “This isn’t a waterfront house. You’re on it.”