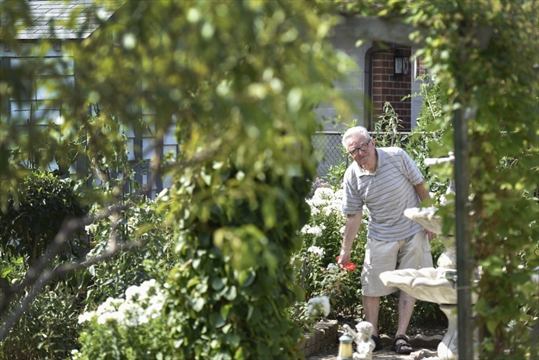 Gino Pocobene pays as much attention to the summer flowers as to the vegetables. There has to be room made for flowers, he says. 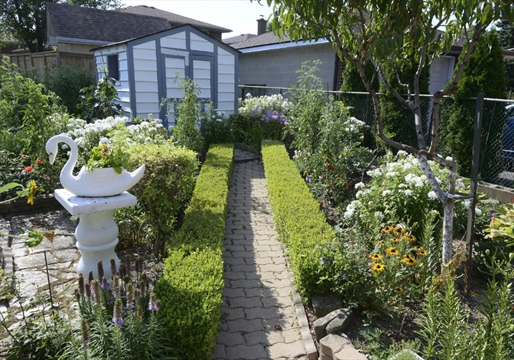 Here is the quintessential Hamilton garden of a time and culture that is rapidly disappearing.

Row upon row upon row of tomatoes: mostly the Roma type grown for sauce. Garlic. Onions. Beans and zucchini and cucumbers. A small square with a fountain — a piazza sized for a back yard.

The owners: Gino and Connie Pocobene, married 60 years. In Canada since 1956, in their East Mountain home since 1966 (June 23 of that year, Gino notes). He worked construction, then decades at Stelco. They had two children, who have since given them five grandchildren. Gino started growing tomatoes two years after they moved in and he’s never stopped.

All those jars of sauce, all those vegetables fed a growing family. And every morning and evening from early spring to late fall, he was out planting, watering, tending, weeding.

“And it keeps me moving,” says Gino who, a casual visitor is surprised to learn, is 87.

There are lots of ornamental plants around and among the vegetables — flowering trees, hostas, rose bushes, great swaths of phlox, as well as sunflowers and dahlias — and a clear sense of design to the garden. Clipped boxwood hedges border a path on a diagonal to the garden shed and add a little structure to a very busy garden.

But while the front of their property is completely given over to flowers — no lawn here — the back is where the vegetable garden reigns. Gino notes that the front and back gardens have great displays of tulips in the spring and he pays as much attention to the summer flowers as to the vegetables. There has to be room made for flowers.

“If you got no flowers in the garden …” he says, tailing off with a very Italian shrug.

The first crop of tomatoes has already been made into sauce; hundreds of large, brilliant red successors are hanging from the vines or in baskets ready for the next batch. The onion tops are bent over, marking the curing time shortly before they are lifted. Green beans are maturing and the garden is alive with butterflies and other pollinators.

Gino doesn’t use a sprinkler: they waste too much water, he says, and water on the leaves is a recipe for disease. So every plant in the garden — there are more than 80 tomato plants alone — is hand-watered with the hose every second day.

He also doesn’t use any fertilizer. He grows winter rye in the garlic bed after harvest and turns the green rye under the soil in the fall to enrich it for the next crop of garlic. In the tomato beds, all the stems are cleaned up after frost, but the leaves are buried to decompose and freshen the soil over the winter.

It’s been a tough summer for gardeners: while many plants have thrived in the heat, it doesn’t seem to work that way for people.

He grows all his tomatoes from seed saved from the previous season. He’s already got a couple of prize tomatoes set aside now for seed collection later.

That boxwood hedge? He grew it entirely from cuttings he put into the soil.

Dahlias come inside for the winter, along with the rosemary; three small fig trees (replacing older, larger ones that became unwieldy) will be laid down and buried under leaves, boards and plastic for winter protection.

“I don’t buy nothing from the store,” he says. “I like things that come back every year.”

For Gino and Connie, the garden has fed the family — the edibles never go to waste — and the soul. The little courtyard feature, with its bubbling tiered fountain, is a nod to, and reminder of, the Italy they left behind.

Over 50 years in their home, they have made a garden that is personal, practical, pretty and — dare we use an overworked word? — authentic.

Rob Howard lives and gardens in Hamilton. You can email him at gardenwriter@bell.net and find him on Facebook at Rob Howard: Garden writer.