It sounds like a leap of faith. But on Monday, the city took its first big step toward turning soon-to-be former Stelco land into creative offices, light industry, movie studios and green space — asking the feds and province for help.

The city’s vision got some support from the province, which is taking steps to address city concerns that a five-year target for dispersing the lands  — which will become available as part of the court supervised-sale of Stelco to Bedrock Industries — was too fast.

Hamilton city councillors, via the general issues committee, voted to contact federal and provincial ministries for money and other support to make their Stelco dream a reality.

‘I see higher order, cleaner uses than we’ve been accustomed to over the years.’– Mayor Fred Eisenberger

That dream involves turning 329 hectares (813 acres) of former steel production land, into a Toronto or Brooklyn Navy Pier-style waterfront. That includes a hub of light industry surrounded by creative buildings, plus a shoreline park and waterfront trail.

It sounds far off now, but over 25 years, it can happen, said Mayor Fred Eisenberger. And Monday’s vote, which includes starting the search for private investors, was the first major leap.

He foresees some sort of joint ownership with the federal and provincial government, and private developers stepping forward.

“I see higher order, cleaner uses than we’ve been accustomed to over the years,” he said.

“This one will be unique.”

A recent letter from Charles Sousa, Ontario minister of finance, reveals this may not be far fetched. Furthermore, the letter says the city will have more time than it initially thought.

The court-supervised sale deal of Stelco to Bedrock said the land had to be dispersed in five years.

Eisenberger, drawing on other city experiences with polluted sites and brownfields, said that was too rushed and would result in a “fire sale” of unique lands that currently have little value, but could have significant value if development is not rushed.

As part of the Bedrock deal going before the courts Friday, lands aside from the active Stelco steelmaking properties are proposed to be sold for development. The proceeds of that sale will go to fund pensions and benefits, according to the province.

The province plans to put $10 million toward getting the land trust off the ground, and then lend another $66 million toward making sure the benefits are covered even if it takes several years to get the land ready for sale.

Now Sousa is offering an extended 10-year period period for the land dispersal. Sousa also said the province is willing to keep talking. 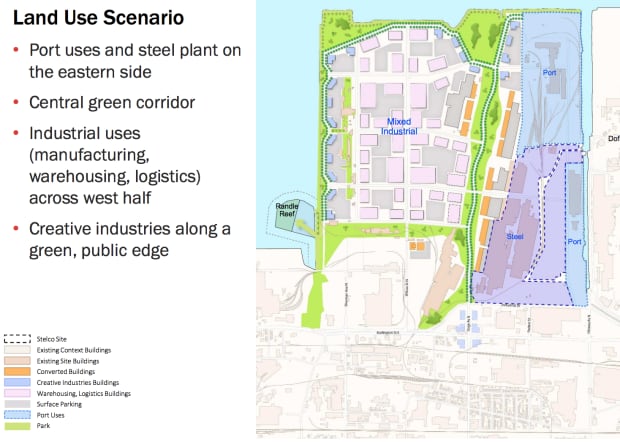 This image maps out the vision for the city’s plan for the former Stelco lands. (City of Hamilton)

“I look forward to continuing a dialogue with the city as we work to create an arrangement that provides sustainable jobs, operations, pensions and benefits for Stelco employees and retirees,” he wrote, “and aligns with the city’s commitment to fostering local economic development.”

A key issue to be resolved is whether the city even ends up with control over the lands, or if that falls to the Hamilton Port Authority.

There’s a lot at stake in the plan succeeding.

The land could also generate as much as $38 billion in wages for the area in the future, or 530,000 “job years,” said Rich Couldrey, the city’s executive director of development and strategic investments. That figure came from a team of economic, planning and real estate advisors the city hired. That team recommended the plan.

The future of those lands has been an anxious topic ever since Stelco cut back on production in Hamilton, potentially freeing up some of its precious waterfront land.

The land has some issues. For example, it’s surrounded by heavy industry, which limits its use. (It’s in the shadow of Stelco’s remaining operations, and next door to ArcelorMittal Dofasco.) It’s zoned K, which allows most major heavy industrial use. It also needs to be remediated, and no one knows yet how much that will cost.

Currently, a large portion of Hamilton’s east-end harbour-front land is under the control of the port authority a federally mandated corporation. But Eisenberger said that doesn’t mean the HPA will ultimately own the land.

The city’s plan includes land for HPA use, he said. He’d like the city and the HPA to work together, not compete in the process.

“In my mind, I very much include the Port as part of the plan, but not controlling the whole thing.”