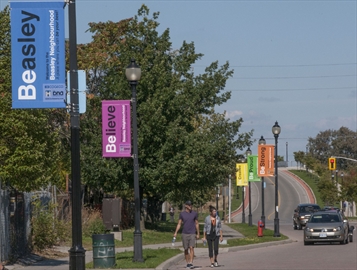 ALL THE HARD FACTS HERE

Owning a home is an elusive dream for renters who can’t scrape together enough cash for a down payment.

But the city sees home ownership as glue that helps encourage neighbourhood cohesiveness.

That’s why for the first time officials are focusing a municipally run down-payment assistance program on Hamilton’s less affluent areas.

“It’s really about encouraging investment in the neighbourhoods,” Dave Brodati, the city’s manager of investment in affordable housing, said Monday.

Launched in 2008 with provincial and federal funding, the home ownership program offers as much as 10-per-cent down-payment assistance — a loan that’s interest- and payment-free for 20 years. This time around, to qualify, low-to-moderate-income renters must purchase homes in the following neighbourhoods: Jamesville, Beasley, Keith, Gibson/Landsdale, Stinson, Sherman, Crown Point, McQuesten, Riverdale, Davis Creek, and Rolston.

Most are in the lower city; Rolston is on the Mountain and Riverdale is in Stoney Creek.

In recent years, the city’s neighbourhood action strategy has made these areas priorities through a number of improvement projects involving residents.

To qualify for the down-payment program, a buyer must be currently renting for at least six months in Hamilton and be preapproved for a mortgage. The applicant must also have a maximum yearly gross household income of $70,000.

The home they’re looking to purchase must be in one of the targeted neighbourhoods and cost $275,000 or less.

City staff arrived at that cut-off by examining resale data held by the local real estate board.

“We wanted to strike a balance in terms of making sure there’s choice for people but still had a moderate level,” Brodati said.

They tend to stick around longer and have a vested interest in helping improve their turf, Brown noted.

“I would hope there would be some purchasing of houses that might be a little more on the rundown side, so that people could actually invest in really renovating those homes.”

A healthy mix of renters and homeowners is also critical to an area’s success; diversity leads to more services, such as schools and seniors’ centres, Brown said.

“If you have a very homogenous neighbourhood, you may not have that kind of breadth of services I think that make neighbourhoods very vibrant.”

Brodati says the down-payment program also aims to open up a tightening rental market in Hamilton by turning tenants into owners.

Mortgage rules have become more stringent, making it harder for people to qualify; in turn, fewer vacancies, and gentrification, to some extent, are driving rents up, he said.

“So the lower cost units are certainly at a premium.”

Last year, the average rent in Hamilton in buildings with six or more units was $813 per month while the vacancy rate was 2.3 per cent.

The fund, which doesn’t draw on the municipal tax levy, replenishes itself when program participants repay loans. This time, the program has about $415,000 in the pot for about 25 buyers.

Staff say there’s considerable interest in the program and qualified applicants will be chosen on a first-come, first-served basis.

WHO: Tenants currently renting for at least six months in Hamilton; who are over 18 years; pre-approved for a mortgage; don’t own a home or property; aren’t married to or in a relationship with a property owner; combined maximum annual gross household income is $70,000 or less

WHEN: Houses must be purchased after March 30, 2015 and after acceptance into the program

HOW MUCH: Five and 10 per cent down-payment assistance, according to income and dependents

TERMS: Funds are 20-year interest-free and payment-free loans that are forgiven if applicants keep their home for 20 or more years; if the home is sold sooner, the original loan plus five or 10 per cent of the capital gain must be paid back; the loan is also forgiven if the home sells for less than the original price.