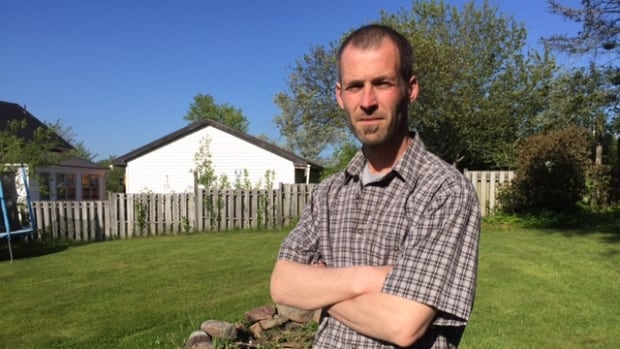 Ryan Manning stands in the backyard he was led to believe was part of his property when he purchased it. (Yvonne Colbert/CBC)

Imagine buying a home with a deck, a shed and a big fenced backyard, only to discover you own neither the backyard nor the shed and only part of the back deck.

That’s what happened to Ryan Manning of Salmon River, N.S., who has since spent months looking for answers from everyone from the real estate agent and lawyer to the previous owner and the company that sold him title insurance.

“It was a huge shock,” Manning told CBC News, recalling the moment last fall when a man knocked on his door and offered to sell him the back half of what he thought was already his property.

“I didn’t know what to do at that point. I wouldn’t have bought my house knowing that situation.”

Manning was in the market for a first home when he drove by the Miller Road property near Truro in August 2014, just as the For Sale sign was going up following a foreclosure.

The listing showed a duplex with a picture of the big backyard. Under “garage” it specified “other” and showed the shed dimension as “10 x 25.”

Manning contacted the listing agent from the ReMax Fairlane Realty office in Truro to view the property, which was listed “as is, where is.” He said there was never any question the backyard was included. 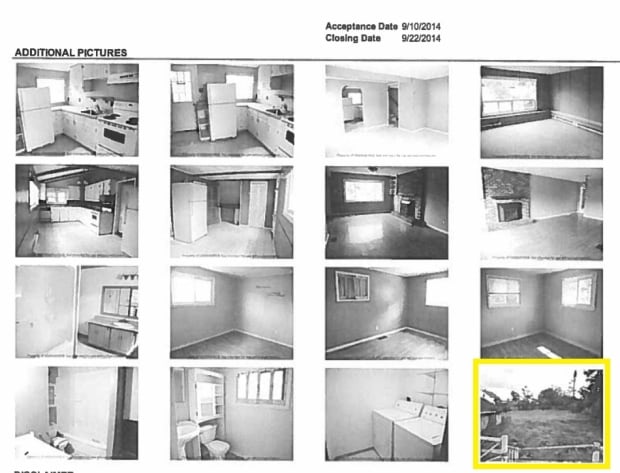 The listing for Manning’s home showed a picture of the backyard in the bottom right photo. (MLS)

“I said, ‘Is this my property?’ and they said, “Yes, the fence right here is the property that is yours,”‘ Manning said in an interview.

Manning didn’t think there was any problem with the boundary, since the fence goes completely around the yard and part of the house.

After the sale was finalized in September 2014, Manning was given the keys to the house and the shed.

He started working on the fixer-upper, hoping to live in half and rent out the other side to help cover his mortgage.

Everything was going as planned until that fateful knock on his door in October 2016.

Manning was stunned to learn the land his home sat on was one legal parcel of land while his backyard was on another. Each has a separate parcel identifier, commonly known as a PID.

“I seen pictures [of the backyard] right there in my listing,” said Manning, adding he believed the real estate agent.

“They’re the ones that are supposed to be there for me to tell me the truth about my property, to know what I’m buying.” 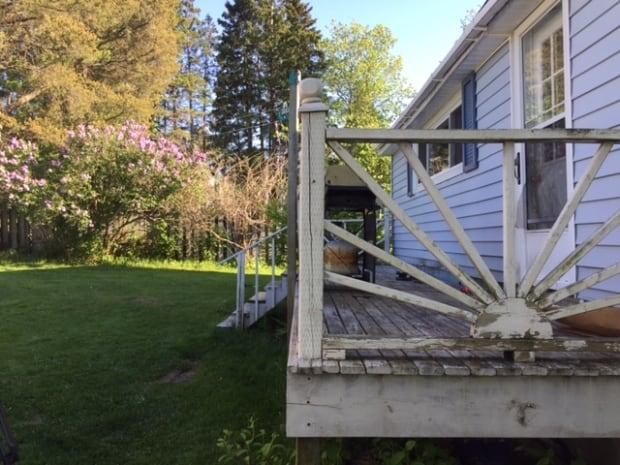 Manning’s property ends at his deck, and the backyard, owned by someone else, may include part of the deck. (Yvonne Colbert/CBC)

The listing did contain a disclaimer stating: “All information displayed is believed to be accurate but is not guaranteed and should be independently verified. No warranties or representations are made of any kind.”

The listing agent had retired, but he went back to ReMax and his lawyer at Patterson Law seeking answers. He also contacted the company that was selling the home, Genworth Financial Mortgage Insurance Company Canada.

Not covered by title insurance

Manning’s lawyer, who has also since retired, did initially advise him to have a full survey completed or a location certificate obtained before purchasing the property.

In a letter from Patterson Law, Manning was told an alternative was title insurance, which “would step in to compensate you if the property you purchased had issues with respect to location and boundaries, water potability, etc.”

It went on to say “a mortgage company will generally accept a title insurance policy in lieu of a location certificate or survey.”

Stewart Title Guaranty, the company from which he purchased title insurance, said the insurance covered the lender, not him.

Manning said the last nine months have been difficult, citing finger-pointing by everyone involved with no one willing to accept responsibility for the listing or his purchase of a property only half the size he thought he was getting. 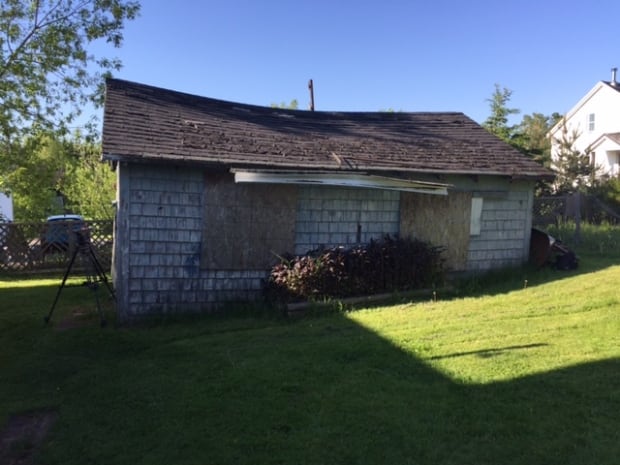 Even though Manning doesn’t own the shed or the backyard where it sits, he was given keys to the shed when he bought the property. (Yvonne Colbert/CBC)

“I’ve been bounced back and forth since October,” he said.

“I’ve gotten nowhere. I’ve contacted everyone I could and pretty much got down to the point where they say, ‘I’m sorry to hear about this. There’s not much we can do.'”

CBC News also contacted the owner of the company that sold the property. Sharon Corcoran said she submitted a claim on Manning’s behalf to her insurer for errors and omissions.

However, Manning subsequently received a letter saying Corcoran and her brokerage are not liable for the error.

“No offer of compensation shall be forthcoming on their behalf,” the letter said.

Since CBC News contacted Patterson Law, which originally handled the purchase for Manning, it has been working with him to resolve the matter.

In an email late Wednesday afternoon, managing partner George White said “we are pleased to advise that an agreement has been entered into between the parties which should result in a successful conclusion.” It thanked CBC for bringing the matter to its attention.

Manning isn’t suggesting anyone intentionally deceived him. A lawyer for Genworth, the company selling the foreclosed property, said in a letter: “I don’t think anyone knew of the second PID prior to the sale, including the purchaser and/or the Realtors.”

But the first-time homebuyer said the whole situation has created a huge amount of stress since he can’t sell the property as it currently exists and he doesn’t have the money to buy what he thought was his backyard.

“It’s something that could financially cripple you,” he said.

“I put so much money into my home to fix it up, to try to make it an income property.”

How did it happen?

It turns out the two pieces of land were sold as one when purchased by Joan and Steven Brundin in 1989. 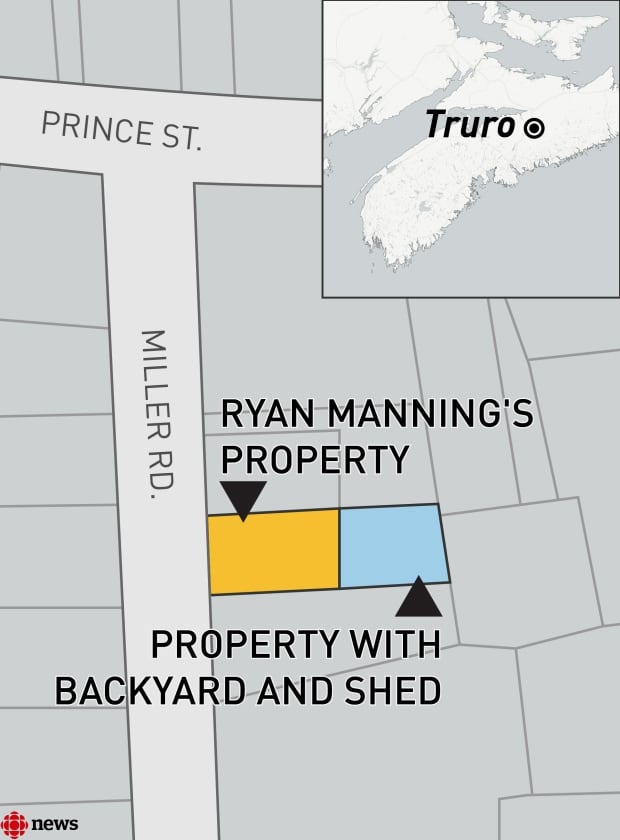 After Steven died, Joan sold the property, but only the lot with the house was transferred to the new buyer.

She subsequently discovered the backyard lot had not been transferred, so she gave it to the new owner. He is the one who is now offering to sell it to Manning.

The experience has left Manning wondering, who do you trust when buying a home?

“I don’t know how this can happen to someone,” he said.