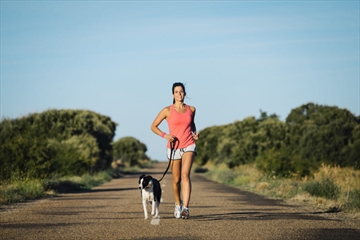 The deaths of four people — three hikers, one mountain biker, all only in their 20s — during Arizona’s ongoing heat wave are horrifying. They are grim reminders that our steamy, sultry, sweat-inducing heat needs to be observed and honoured. Here are five ways of being smart during outdoor workouts (in addition to wearing sunscreen and sunglasses):

I don’t care if you’re kayaking for 15 minutes or running one mile; you need water — to drink, to pour over your head, to offer a dog (more on that one later). To make sure mine stays nice and cold, I fill my water bottle about half full (higher as the summer progresses) and leave it in the freezer overnight. Come morning, I fill it up with tap water. Ah, refreshment all through the run.

So you wake up and the radio weather guy says, “It’s 22 degrees.” And you think, “Oh, that’s not so bad.” Hold up just a minute there and recite the rule of temperature thumb for the outdoor exerciser: Dress like it’s 10 degrees warmer. That’s what it’ll feel like within minutes of moving your body.

3. Set aside your planned pace and distance.

I’d been thinking something was wrong with me because I haven’t been able to run as fast as I usually do. Then a friend asked on Facebook: “What’s your summer pace?” And she listed hers, which was at least 90 seconds slower than I’ve seen her cooler-weather postings.

There’s a great chart on runnersconnect.net to help you figure the pace you should be going according to how fast you usually run or walk. Former U.S. Olympian Jeff Galloway has formulated this theory based on his and others’ experience: For every 5 F over the 60-degree mark, plan on a pace about 2 per cent slower.

For instance, an 8-minute mile at 60 F would be 8:25 minutes for 65 to 70 F, 9:35 for 80 to 85 F. If it’s any consolation (which it should be), your heart will beat just as fast going that slower pace and, come cooler temperatures, you’ll probably feel better than you thought you would.

4. Hit the lake or boot camp or sidewalks earlier or later than usual.

Granted, the morning temperature is cooler, but keep in mind “cooler” is a relative term, and humidity tends to be higher in the morning. Something else to consider: The sun is rising earlier, which means you can head out earlier. It’s also setting later, and the air stays hot even once the stars come out.

In other words, it’s not used to hot weather. If the sidewalk feels like a stove top to you, it’s feels hotter to your shoeless dog. If you’re thirsty, your dog is thirsty. If your dog is lagging behind you, stop and let Fido rest. And of course you’d never take your dog in the car and leave it while you dash into a store or the gym. Right?