5 reasons why Hamilton is renaming part of Burlington St. after Nikola Tesla 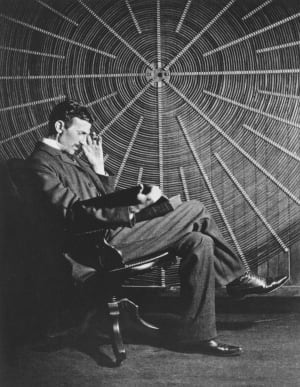 Nikola Tesla in front of a spiral coil, 1896

The decision to rename part of Hamilton’s famed Burlington Street East, (the part running from Ottawa Street East to the QEW, in both directions,) to “Nikola Tesla Boulevard” after the Serbian scientist, inventor and pioneer in electricity, has some people scratching their heads.

Why here? What’s the connection to Hamilton?

Here are five facts that may clarify things:

1. Hamilton was first city in Canada to receive AC electricity, and became known as “The Electric City”

This proved to be an important development for the city. Thanks to the uniqueness of its widespread access to hydroelectric power through Decew Falls, Hamilton branded itself “The Electric City.” It marketed itself as a place with affordable power.

Cheap access to power was compelling to The Hammer’s famous steel mills, and with it, they were able to produce their product with maximized efficiency. The combination of affordable power and plentiful access to local steel was a boon to many businesses that went on to form the backbone of Hamilton’s industrial sector. Cheap electric power also attracted a number of other major industries to Hamilton. Some of these included:

3. A group of Hamilton Tesla enthusiasts cared so much they raised over $180 000 to make it happen

The Nikola Tesla Educational Corporation was formed in 2014, and in 2015 they went to the city to request this name change for a part of Burlington Street in honour of Tesla. At present they say they have raised over $180 000, with an initial funding goal $150 000, which is the amount needed to pay for the new signs and to provide awards and scholarships.

4. It’s an excuse to have a big outdoor party featuring a bunch of Tesla-patented technology

The Tesla Electric Festival of 2016 will be held on July 10th at Confederation Beach Park, and will feature the official ribbon cutting ceremony for the Nikola Tesla Boulevard signs, as well as a marching band, Tesla cars, and battling robots, among other attractions.

Nikola Tesla was an inventor now widely-regarded as a man of profound genius. He even inspired the ambitious Elon Musk to be the namesake of Musk’s intended game-changing electric car. A recent ad for an autopiloted Tesla Model S was filmed in Hamilton, along the 403 near the exits for King Street and Main Street.

Signage denoting the name change will start being put up on Wednesday, June 29. Work crews are expected to be working on replacing signs up to July 8.